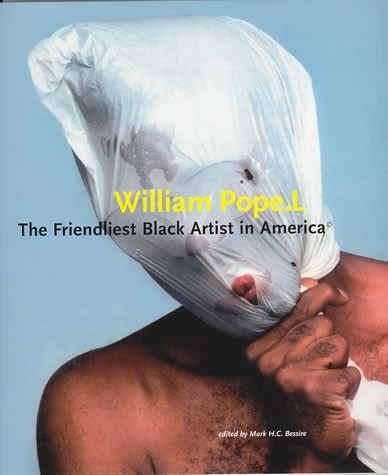 An introduction to the work of the controversial visual and performance artist William Pope.L.

The artist William Pope.L, who teaches at Bates College in Lewiston, Maine, has been producing some of the most original visual and performing art in America for many years. But it was not until the Acting Chairman of the National Endowment for the Arts overturned the recommendations of the NEA's own advisory panel to support this publication and the exhibition it accompanies that Pope.L became the subject of feature articles in the nation's major newspapers. Pope.L became a cause celebre as a result of the scandal, but he deserved to be known long before that. His work is humane, accessible, profound, and humorous; it is also deeply challenging and self-aware. It is neither an accident nor a joke that his business card reads "Friendliest Black Artist in America."

Many of Pope.L's pieces take place on the street. He has eaten and regurgitated copies of The Wall Street Journal, tied himself to a bank door and handed out money (a sort of reverse panhandler), crawled up the Bowery wearing a business suit, and walked down 125th Street in Harlem wearing a 12-foot white cardboard phallus. Although he frequently deals with racial issues, his work confounds preconceptions of what "black art" should be.

This book, which accompanies a nationally touring exhibition of Pope.L's work, explores his impact on American art and culture. It contains sections on practices, body, performance, dialogue, consumption, and a selection of the artist's writings and a chronology. The essays are by Mark H. C. Bessire, Suzanne Preston Blier, C. Carr, Geoffrey Hendricks, Stuart Horodner, Lowery Stokes Sims, Kristine Stiles, and Martha Wilson.