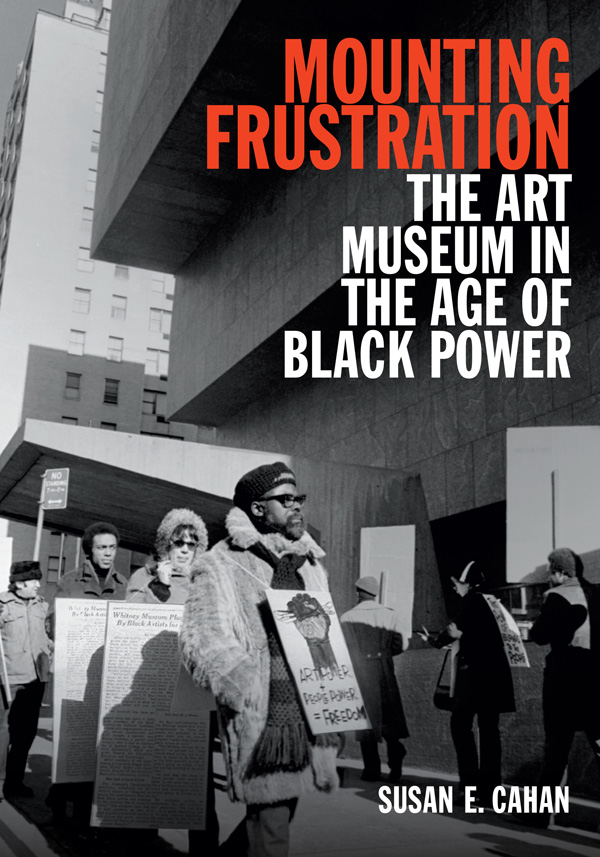 Title: Mounting Frustration: The Art Museum in the Age of Black Power

Prior to 1967 fewer than a dozen museum exhibitions had featured the work of African American artists. And by the time the civil rights movement reached the American art museum, it had already crested: the first public demonstrations to integrate museums occurred in late 1968, twenty years after the desegregation of the military and fourteen years after the Brown vs. Board of Education decision. In Mounting Frustration Susan E. Cahan investigates the strategies African American artists and museum professionals employed as they wrangled over access to and the direction of New York City's elite museums. Drawing on numerous interviews with artists and analyses of internal museum documents, Cahan gives a detailed and at times surprising picture of the institutional and social forces that both drove and inhibited racial justice in New York's museums.

Cahan focuses on high-profile and wildly contested exhibitions that attempted to integrate African American culture and art into museums, each of which ignited debate, dissension, and protest. The Metropolitan Museum's 1969 exhibition Harlem on My Mind was supposed to represent the neighborhood, but it failed to include the work of the black artists living and working there. While the Whitney's 1971 exhibition Contemporary Black Artists in America featured black artists, it was heavily criticized for being haphazard and not representative. The Whitney show revealed the consequences of museums' failure to hire African American curators, or even white curators who possessed knowledge of black art. Cahan also recounts the long history of the Museum of Modern Art's institutional ambivalence toward contemporary artists of color, which reached its zenith in its 1984 exhibition "Primitivism" in Twentieth Century Art. Representing modern art as a white European and American creation that was influenced by the "primitive" art of people of color, the show only served to further devalue and cordon off African American art.

In addressing the racial politics of New York's art world, Cahan shows how aesthetic ideas reflected the underlying structural racism and inequalities that African American artists faced. These inequalities are still felt in America's museums, as many fundamental racial hierarchies remain intact: art by people of color is still often shown in marginal spaces; one-person exhibitions are the preferred method of showing the work of minority artists, as they provide curators a way to avoid engaging with the problems of complicated, interlocking histories; and whiteness is still often viewed as the norm. The ongoing process of integrating museums, Cahan demonstrates, is far broader than overcoming past exclusions.