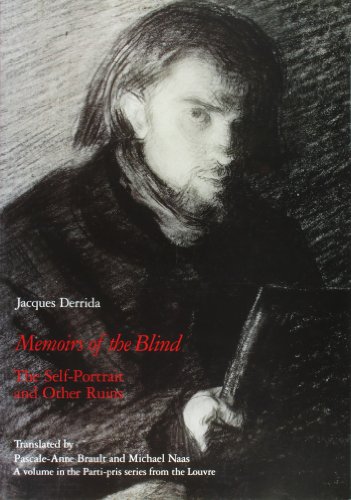 Derrida, Jacques - Memoirs of the Blind: The Self-Portrait and Other Ruins

Title: Memoirs of the Blind: The Self-Portrait and Other Ruins

In this brilliant essay, Jacques Derrida explores issues of vision, blindness, self-representation, and their relation to drawing, while offering detailed readings of an extraordinary collection of images. Selected by Derrida from the prints and drawings department of the Louvre, the works depict blindness--fictional, historical, and biblical. From Old and New Testament scenes to the myth of Perseus and the Gorgon and the blinding of Polyphemus, Derrida uncovers in these images rich, provocative layers of interpretation. For Derrida drawing is itself blind; as an act rooted in memory and anticipation, drawing necessarily replaces one kind of seeing (direct) with another (mediated). Ultimately, he explains, the very lines which compose any drawing are themselves never fully visible to the viewer since they exist only in a tenuous state of multiple identities: as marks on a page, as indicators of a contour. Lacking a "pure" identity, the lines of a drawing summon the supplement of the word, of verbal discourse, and, in doing so, obscure the visual experience. Consequently, Derrida demonstrates, the very act of depicting a blind person undertakes multiple enactments and statements of blindness and sight. Memoirs of the Blind is both a sophisticated philosophical argument and a series of detailed readings. Derrida provides compelling insights into famous and lesser known works, interweaving analyses of texts--including Diderot's Lettres sur les aveugles , the notion of mnemonic art in Baudelaire's The Painter of Modern Life , and Merleau-Ponty's The Visible and the Invisible . Along with engaging meditations on the history and philosophy of art, Derrida reveals the ways viewers approach philosophical ideas through art, and the ways art enriches philosophical reflection. An exploration of sight, representation, and art, Memoirs of the Blind extends and deepens the meditation on vision and painting presented in Truth and Painting . Readers of Derrida, both new and familiar, will profit from this powerful contribution to the study of the visual arts.