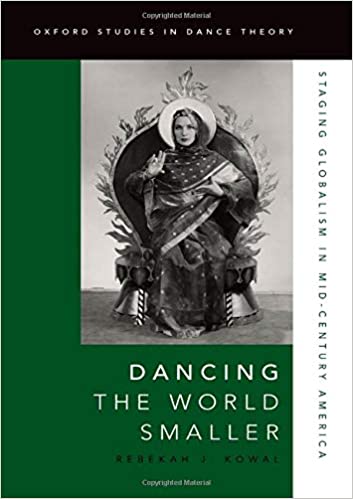 Dancing the World Smaller examines international dance performances in New York City in the 1940s as sites in which dance artists and audiences contested what it meant to practice globalism in mid-twentieth-century America. During and after the Second World War, modern dance and ballet thrived in New York City, a fertile cosmopolitan environment in which dance was celebrated as an emblem of American artistic and cultural dominance. In the ensuing Cold War years, American choreographers and companies were among those the U.S. government sent abroad to serve as ambassadors of American cultural values and to extend the nation's geo-political reach. Less-known is that international dance performance, or what was then-called "ethnic" or "ethnologic" dance, enjoyed strong support among audiences in the city and across the nation as well. Produced in non-traditional dance venues, such as the American Museum of Natural History, the Ethnologic Dance Center, and Carnegie Hall, these performances elevated dance as an intercultural bridge across human differences and dance artists as transcultural interlocutors. Dancing the World Smaller draws on extensive archival resources, as well as critical and historical studies of race and ethnicity in the U.S., to uncover a hidden history of globalism in American dance and to see artists such as La Meri, Ruth St. Denis, Asadata Dafora, Pearl Primus, José Limón, Ram Gopal, and Charles Weidman in new light. Debates about how to practice globalism in dance proxied larger cultural struggles over how to reconcile the nation's new role as a global superpower. In dance as in cultural politics, Americans labored over how to realize diversity while honoring difference and manage dueling impulses toward globalism, on the one hand, and isolationism, on the other.