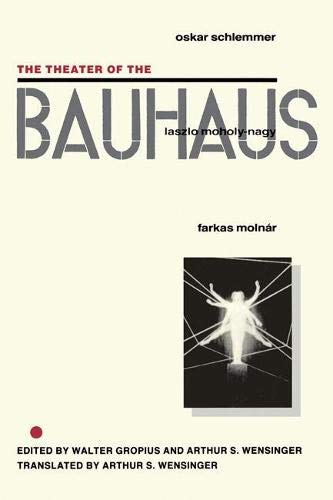 Schlemmer, et. al. - The Theater of the Bauhaus

Title:  The Theater of the Bauhaus

Few creative movements have been more influential than the Bauhaus, under the leadership of Walter Gropius. The art of the theater commanded special attention. The text in this volume is a loose collection of essays by Oskar Schlemmer, Laszlo Moholy-Nagy, and Farkas Molnár (who in an illustrated essay shares his vision of a total theatre space), with an introduction by Bauhaus leader Walter Gropius. Originally published in German in 1924, Die Bühne im Bauhaus was translated by A. S. Wensinger and published by Wesleyan in 1961. It was prepared with the full cooperation of Walter Gropius and his introduction was written specially for this edition.

From Bauhaus experiments there emerged a new aesthetic of stage design and presentation, a new concept of "total theater." Its principles and practices, revolutionary in their time and far in advance of all but the most experimental stagecraft today, were largely the work of Oskar Schlemmer, Laszlo Moholy-Nagy, and their students. Profusely illustrated and startling in its typography (the work of Moholy-Nagy), the 1924 volume quickly became a collector's item and is now virtually unobtainable. Those interested in the stage, the modern visual arts, or in the bold steps of the men of genius who broadened the horizons of aesthetic experience will appreciate that this translation is available again.