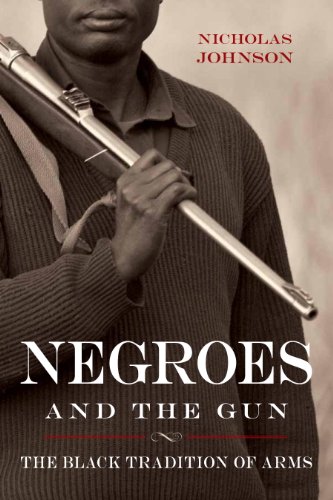 Negroes and the Gun: The Black Tradition of Arms

Title: Negroes and the Gun: The Black Tradition of Arms

Chronicling the underappreciated black tradition of bearing arms for self-defense, this book presents an array of examples reaching back to the pre—Civil War era that demonstrate a willingness of African American men and women to use firearms when necessary to defend their families and communities. From Frederick Douglass's advice to keep “a good revolver” handy as defense against slave catchers to the armed self-protection of Monroe, North Carolina, blacks against the KKK chronicled in Robert Williams's Negroes with Guns, it is clear that owning firearms was commonplace in the black community.

Nicholas Johnson points out that this story has been submerged because it is hard to reconcile with the dominant narrative of nonviolence during the civil rights era. His book, however, resolves that tension by showing how the black tradition of arms maintained and demanded a critical distinction between private self-defense and political violence.

Johnson also addresses the unavoidable issue of young black men with guns and the toll that gun violence takes on many in the inner city. He shows how complicated this issue is by highlighting the surprising diversity of views on gun ownership in the black community. In fact, recent Supreme Court affirmations of the right to bear arms resulted from cases led by black plaintiffs.

Surprising and informative, this well-researched book strips away many stock assumptions of conventional wisdom on the issue of guns and the black freedom struggle.